We asked the Ready Set Sail crew to give us some insight into the main differences between: cruising the Caribbean vs. cruising the Pacific islands…

Here are the top 10 differences for you!

Cruising in the Caribbean is more condensed. You get the same cultural and geographical diversity as the south pacific but in a much smaller package. For cruisers with less time this counts the most. You can spend your days cruising between anchorages and villages instead of spending them at sea between islands.

The accessibility of parts and repair facilities are more frequent and of a higher quality in the Caribbean. All-in-one chandleries, such as Budget Marine, do not exist in the pacific. Haul out facilities are few and far between in the pacific and when available are not financially feasible. The specialization of imported brands and manufacturers is also unique to the Caribbean having both European and American products on hand.

Sailing season between the two are similar but at the same time distinctly different. Where the Caribbean has a clear and defined sailing season, the pacific is larger so the season is flexible depending on location. During hurricane season in the Caribbean boats either haul out or head south and sit it out. This can be expensive but also a misuse of time. In the pacific due to it’s expanse north and south of the equator, the cyclone season can be played and no interruption will occur in your trip. There will always be a sizable cruising ground that is weather free. This allows people to do multiyear trips without any interruption. 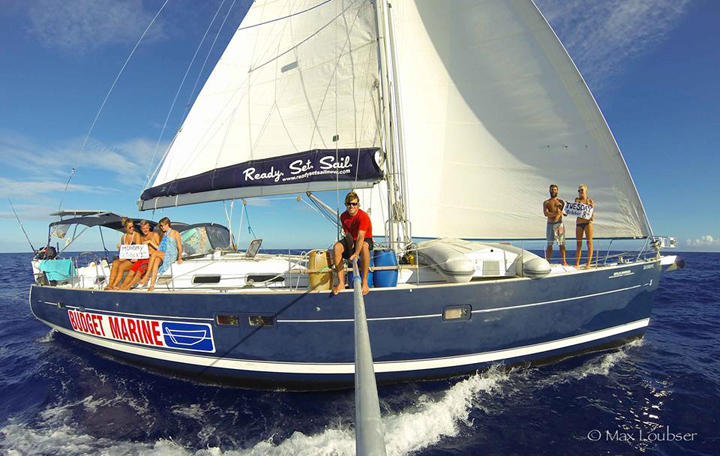 When dealing with finances it’s always hard to determine what the better value is, as people’s lifestyles are always different. For instance in the pacific anything western or alcoholic is extremely expensive. A new solar panel can cost you three times the price we would be used to. However, fresh food and harboring costs can be half the price. I believe that long term the pacific would be more costly due to the long times without the ability of preventative maintenance. The thing that separates the Caribbean in this situation is affordability to order from overseas and pay little to no import duty. That said, a simple lifestyle and well set up boat can cruise the pacific with next to no cost if all goes well.

One of the most important things for me when sailing to new places is the experience of the natural world. Both the Caribbean and the Pacific offer extraordinary natural sights and wonders found nowhere else on earth. Both have coral islands, volcanic islands, and sandy archipelagoes. The Caribbean, even though beautiful, would not in my opinion compare with the grandness of the pacific. Due to its size and remoteness the pacific has maintained a very pristine condition. This is most evident in the wildlife, which is a lot more abundant than elsewhere. Even though almost all the pacific islands are inhabited most do not have the industry or infrastructure to make a visible footprint on their surroundings. In this sense the pacific has a rare feeling of being a place that has not changed or been influenced with the deterioration of civilization. This cannot be said for most of the Caribbean.

For many of us traveling has a lot to do with the experience of food. Again this is solely a matter of personal tastes but I believe that diversity is the key to stimulation. The Caribbean has world-class food that is recognized around the world as a gastronomic experience. The main reason for this is the diverse influence from the French, Spanish, and Indian cultures. The Caribbean offers some of the most diverse food, whether in restaurants or at the market, that you would normally only find in a city. From cheap and delicious street food to five star restaurants it has it all. It helps that many exotic ingredients are flown in every day from all over the world and that meat is not a commodity but more a staple. The pacific even though arguably a more culturally diverse place with just as much French influence does not have access to half as much variety. Meat is also a scarce and expensive ingredient. That said it is unbelievable what you can order at a French resort on a deserted atoll!

We had a friend come and join us in the pacific islands recently. The flight took him sixty-five hours and almost three thousand dollars. This is one of the biggest downsides of the pacific. Accessibility from overseas is a nightmare. If you have friends or loved ones who want to visit (or leave) it takes a lot of planning to not pay through the teeth. Often sailing to another island group is the only way to find a flight out. In contrast, the Caribbean offers local flights and ferries from everywhere with affordable and direct international flights to most other places in the world. Going home for Christmas is definitely an option here.

When that time comes when you realize you need to find some work or give up half way, finding a job is not always an option. In respect to the Caribbean and the Pacific I think that both offer great opportunities if you know where to look. Due to the large and sustained cruising grounds of both areas, all the built up islands offer many opportunities for tradesmen or hands on work. When relying on tourism and the movement of people through an area the jobs reflect that same concept. Positions fill and free up with the seasons giving those coming next a chance to take advantage.

A cruising community is a very special thing that brings everyone together and makes a place alive with activity and a good atmosphere. The pacific is a lot less traveled and people sailing through are more spread out and less connected. When you do find yourself in a place with many boats, this creates a very special bond . Starting in Panama and moving west you meet and sail, or stay in touch, with people the whole way across. The pacific now has the original vibe which the Caribbean possessed.

Lastly and one of the biggest contrasts for me seeing the Caribbean change is the fish. We love to look at them, eat them, or simply catch for fun. There is no doubt that the Pacific over rules the Caribbean for easy catching and great diving. Trawl with a simple squid west of Panama and you are guaranteed a fish or five. Where the Caribbean has become scarce and highly specialized it does not take a master fisherman to find a marlin or yellow fin tuna. That said, the availability of gear (in the pacific) is about nil. The Caribbean not only has the materials but the expertise for amazing fishing and diving. There is still a lot around you just have to know where to look. From fly fishing to sport fishing tournaments, it’s possible. The pacific even though more abundant can be harder to figure out and find what you want. The Caribbean also offers a very competitive market for quality fish if you’re looking to sell.

Grenada
Lera G.
Hi, how can I help?